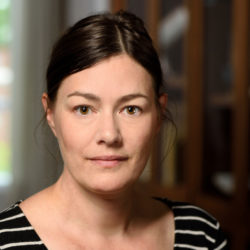 I am the William Kurrelmeyer Curator of Rare Books and Manuscripts in the Sheridan Libraries and Adjunct Professor in the English Department and the Program in Museums and Society. I also serve as Associate Editor of Archive Journal and as Executive Director of the Society for Textual Scholarship.

In the Sheridan Libraries, I am responsible for 19th-, 20th-, and 21st-century collections of rare and archival materials. I pay special attention to women’s, LGBTQ+, and African American history, literature, and culture, the latter in concert with the Africana Archives Initiative of the Billie Holiday Project for Liberation Arts, led by Lawrence P. Jackson, Bloomberg Professor of History and English. In collaboration with the Billie Holiday Project and the Program in Racism, Immigration, and Citizenship, I am affiliated with Inheritance Baltimore.

I am keenly aware of the power and privilege that curators, archivists, and librarians wield, through the assemblage, description, and interpretation of materials (for assemblage and description, in themselves, are forms of interpretation). I am, therefore, particularly dedicated to collecting, preserving, and illuminating the material traces of people, places, ideas, and events that have been distorted, marginalized, or suppressed in the historical record—as well as the “minor” threads within dominant narratives. These histories are often carried by material forms that are themselves vulnerable to misinterpretation, physically fragile, or simply outside the norms that book-focused scholarship has emphasized. Ongoing interests in this respect are postcards, photographs, short-lived periodicals, ephemera, private and limited publications, inexpensive multiples, artist books, and text-image relationships across many kinds of media—as well as archival formats like personal papers, letters, diaries, manuscripts, and digital records. These materials, and the voices they bear through time, require conscientious care in terms of organization and description, and even new collecting paradigms. Only through such care, guided by strong principles, can we hope to gradually unravel the legacies of inequity that our collections have helped to perpetuate.

With Shane Butler, the Nancy H. and Robert E. Hall Professor in the Humanities and Professor of Classics, I co-pilot the John Addington Symonds Project, the inaugural manifestation of the Classics Research Lab. I also teach classes about 19th– and early 20th-century American literary culture focused on rare, archival, and digital materials, which frequently involve students in curatorial and editorial projects—for example, in spring 2020, Scribbling Women: Gender, Writing, and the Archive.

I have been the lead curator of over fourteen exhibitions at Hopkins, including major exhibitions about H. L. Mencken (with the George H. Thompson Collection of Henry Louis Mencken), Stephen Crane (with the Richard Frary Collection of Stephen Crane Materials), John Barth (with the John Barth Collection), and Edgar Allan Poe (with the Susan Jaffe Tane Collection of Edgar Allan Poe). In 2019-2020, I co-curated (with Denis Curatorial Fellow Christina Thomas, a PhD candidate in the Department of History) City People: Black Baltimore in the Photographs of John Clark Mayden and (with Shane Butler and students in the John Addington Symonds Project) Queer Connections: The Library of John Addington Symonds, which featured a copy of Symonds’ A Problem in Greek Ethics, a very scarce, privately printed essay that laid the foundations for the modern LGBTQ+ rights movement.

My published scholarship focuses on authorship and photography, race and gender in the archival record, and the exchanges between textual and visual cultures during the industrial era of print—ie, the mid 19th century through the mid 20th century. My essay on Emily Dickinson’s sheet music was recently published at the Dickinson Electronic Archives, part of a longer project on Dickinson’s sheet music, race, gender, and the 19th-century domestic scene. Essays on queer authorship—that of Henry James and Gertrude Stein—are forthcoming. Previous work has been published in the journals Modernism/modernity, The Journal of Modern Periodical Studies, Digital Humanities Quarterly, and Textual Cultures, among others, and the book collections Digital Pedagogy in the Humanities, edited by Rebecca Frost Davis, Katherine D. Harris, and Matt Gold, Emily Dickinson in Context, edited by Eliza Richards, Primary Stein, edited by Janet Boyd and Sharon J. Kirsch, and Past or Portal?: Teaching Undergraduates Using Special Collections and Archives, edited by Eleanor Mitchell, Peggy Seiden and Suzy Taraba.

My C.V. and more information about my curatorial work, research, and teaching are available at https://mediumraresquare.net/.