Skip to content
Food Policy Changes
Food is no longer permitted in the library as of 11/29. Covered drinks only, and full masking is required at all times except when sipping a drink. If you wish to eat, please go outside or to the Brody Café.
Libraries COVID-19 Updates
Alert 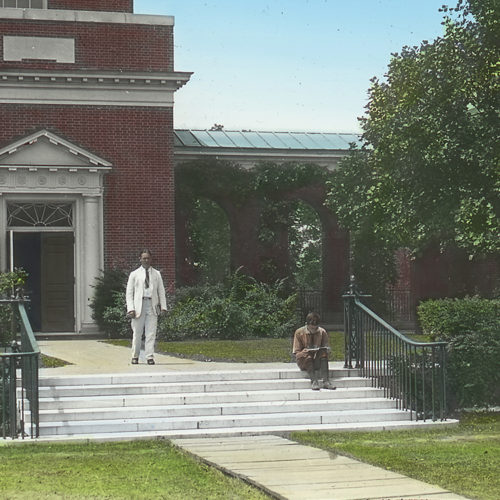 University Archives holds over 20,000 photographs documenting the visual history of Johns Hopkins University from its founding to present. 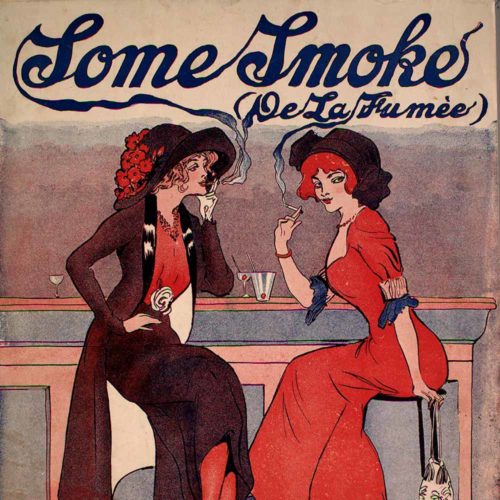 The Lester S. Levy Collection of Sheet Music contains over 29,000 pieces of American popular music from the 19th and 20th centuries. 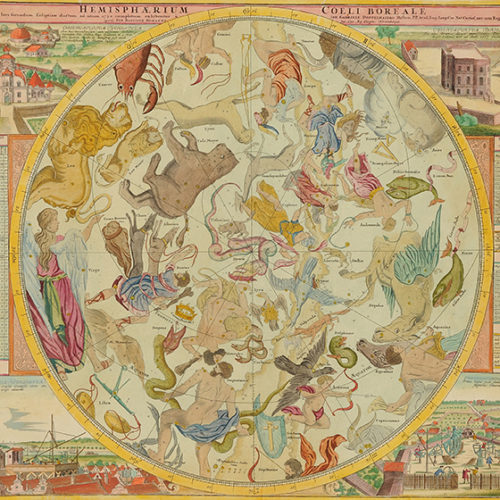 The Hinkes Collection of Scientific Discovery

The Hinkes Collection of Scientific Discovery is composed of hundreds of rare books and manuscripts documenting the trajectory of scientific thought from the 15th to 20th centuries. Highlights include the first edition of Galileo’s illustrated treatise on the discovery of sunspots (1613), the first appearance in print of Charles Darwin’s theory of evolution, in a rare paper printed by the Linnaean Society (1858), and a hand-colored copy of Johann Gabriel Doppelmayr's Atlas Coelestis (1742). 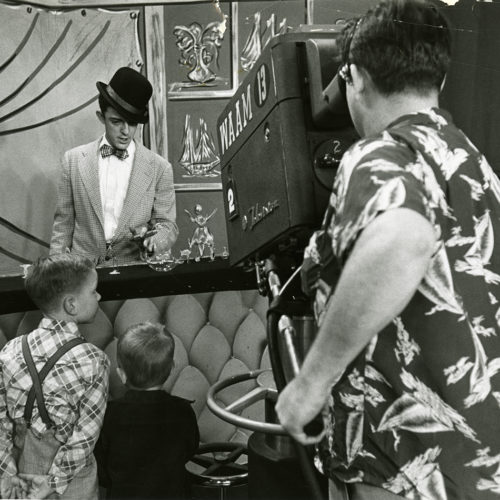 Broadcast to television sets across America from 1948 to 1960, the Johns Hopkins Science review was created by the university to present scientific discovery--in particular the discoveries of Johns Hopkins University faculty--to a popular audience.

There is a thin evidentiary record of archival materials relating to the life of Johns Hopkins. For years, leaders and community members have centered their story of our founder on his benevolent gift to the city of Baltimore: a university and a hospital, and the accepted narrative that he was an early abolitionist. Under the auspices of Hopkins Retrospective and through the Sheridan Libraries, this archive explores and publicly presents archival materials related to the life of Johns Hopkins and his family, including newly discovered census records that provide evidence that Johns Hopkins was a slaveholder during the mid-1800s. 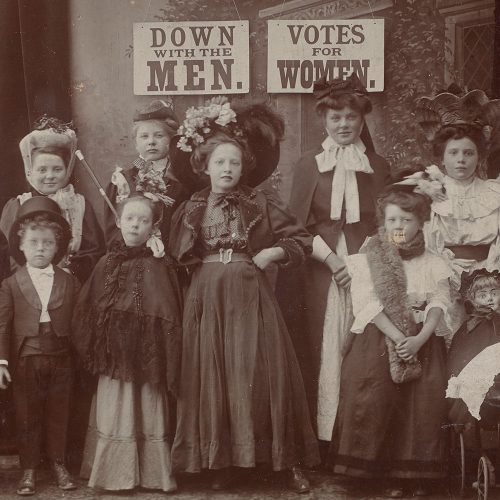 View selections from our collection of ephemera, books, and journals documenting the women's suffrage movement in both the United States and England. Materials include publications produced by or in collaboration with pro-suffrage organizations, as well as commercially made items that present a negative or ambiguous message regarding women and voting rights. 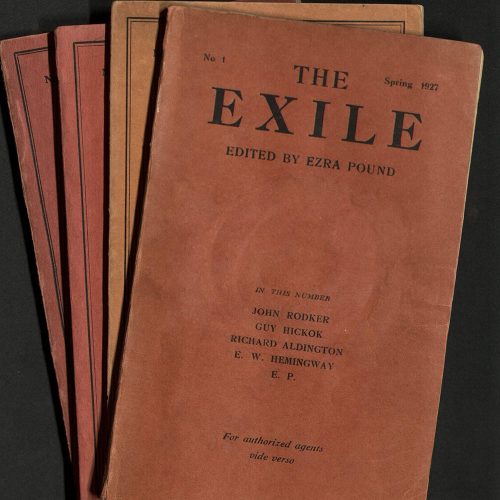 The Frary Collection of Ezra Pound

Ezra Pound (1885-1972) was an expatriate American poet, literary critic, highly influential figure in the development of Imagism, and a major contributor to the early modernist poetry movement at the turn of the century. This collection of materials, created by or relating to Pound from 1909 to 1986, were compiled by collector and Johns Hopkins alumnus Richard S. Frary. 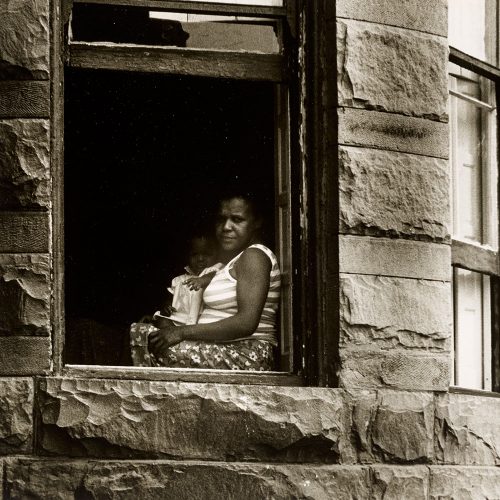 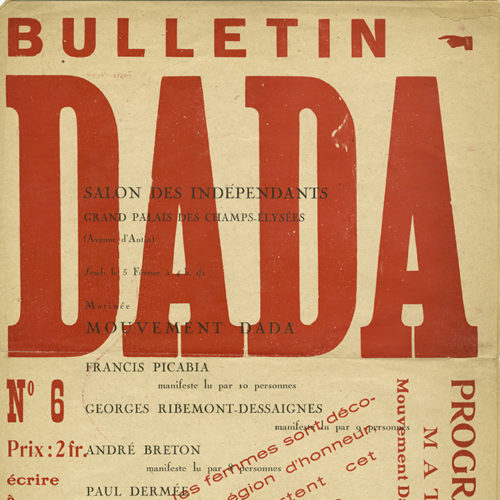 Our rare books collection has a strong showing of periodicals and manifestos illustrating major European art movements of the 20th century, such as Futurism, Surrealism, and Lettrism. Of special note is our collection of periodicals documenting Dada, including Bulletin Dada and Z. 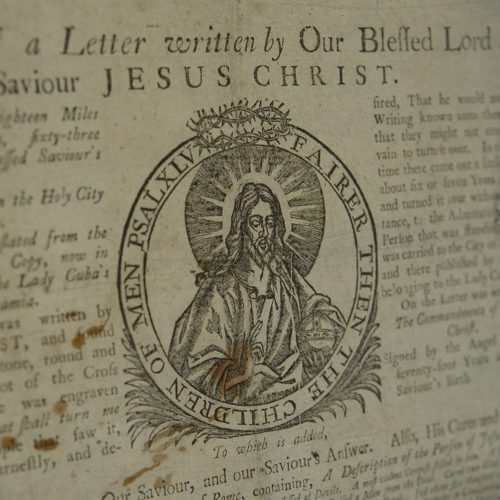 Bibliotheca Fictiva: The Arthur & Janet Freeman Collection of Literary & Historical Forgery offers a tremendous overview of literary forgery from the classical age through the twentieth century, including religious texts, "unknown" works by Shakespeare, and histories all meant to deceive the reader. 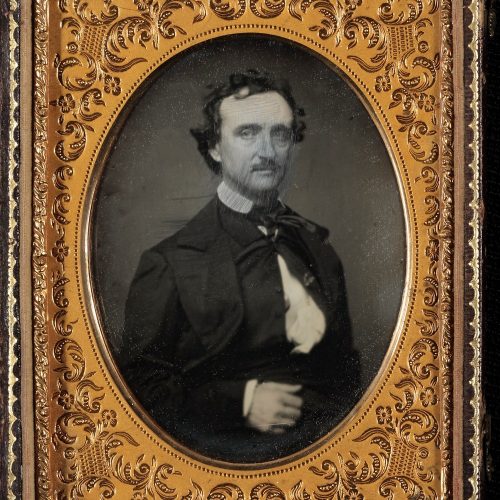 The Enigmatic Edgar Allan Poe in Baltimore and Beyond

A digital exhibition of books and objects associated with Edgar Allan Poe, highlighting his innovations and breadth as a writer. The exhibition includes rare books, manuscripts, and artifacts from the Susan Jaffe Tane Collection of Edgar Allan Poe. 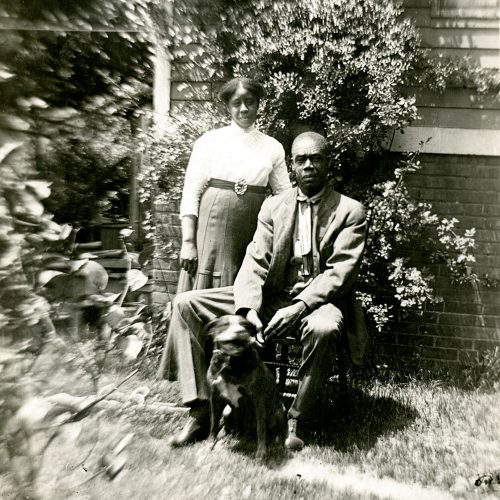 This collection of approximately 1,018 “real photo” postcards, dating from circa 1905 to circa 1946, portrays African-American individuals, couples, and families. “Real photo" postcards are made from personal photographs printed in tiny editions on postcard stock. In the present collection, a few have been mailed as postcards, with messages and postage on the reverse. 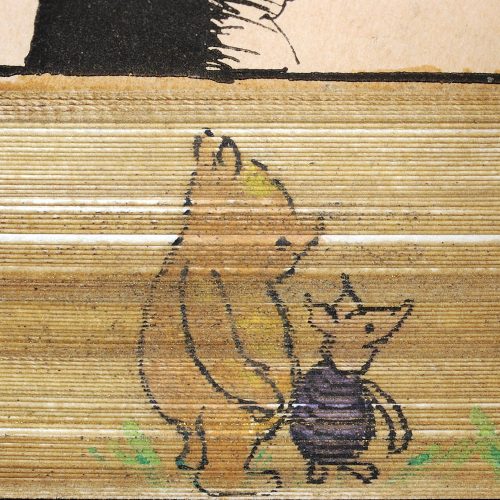 Housed at the George Peabody Library, the Dorothy McIlvain Scott Collection is composed of over two hundred books featuring fine binding and fore-edge painting. Hidden renditions of beloved characters like Winnie-the-Pooh, mysterious city views, and scenes of everyday life are revealed to the reader when the text block is carefully fanned out. 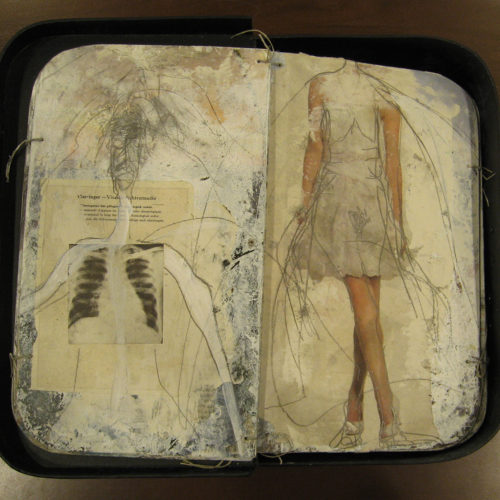 Book arts encompass a wide variety of objects, from limited-run pop-up books to one-of-a-kind sculptural pieces. They are represented in our collection by artists such as Julie Chen, Karen Hanmer, and Hanne Matthiesen, as well as from collectives and fine arts presses like Ediciones Vigía, the Women's Studio Workshop, and the Flockophobic Press. 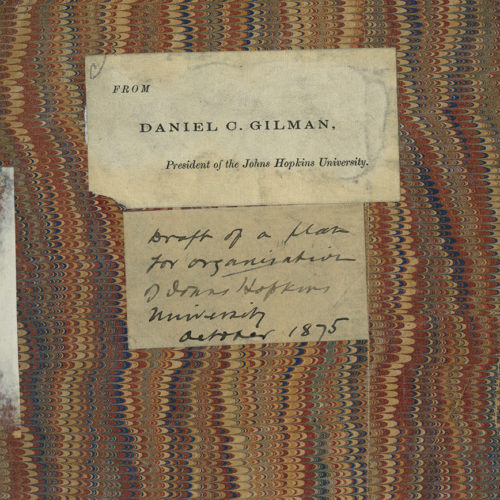 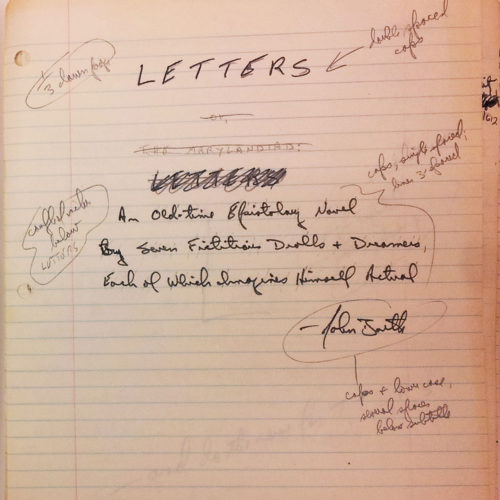 The John Barth Collection, spanning the years from 1930 through 2014, includes a variety of materials such as correspondence, photographs, notebooks, and typescript drafts that document the life and writing process of the National Book Award winning author. Shown here are the manuscript title pages for the novel LETTERS, published in 1979. 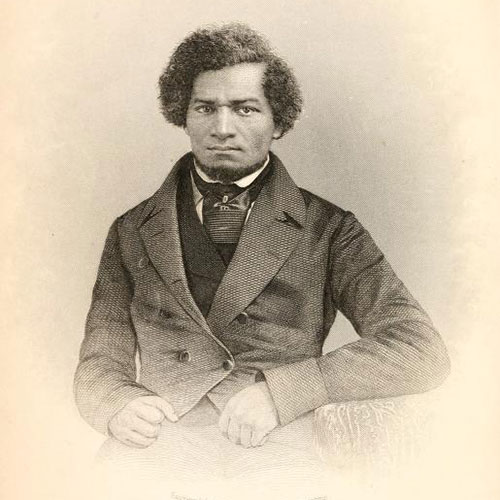 These anti-slavery pamphlets were assembled by the American abolitionist James G. Birney. The original collection was expanded by Birney's son William to include examples of pro-slavery, African colonization, and campaign literature. The collection spans the years 1784 to 1909, and includes important letters and speeches by key abolitionist figures such as Frederick Douglass, reports by abolitionist societies, and periodicals. 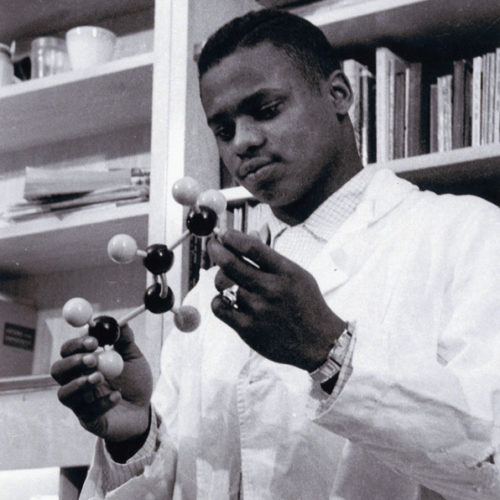 Documents the Hopkins history through recordings and transcriptions of interviews with members of the Hopkins community. The collection includes both audio and video interviews, and continues to grow as new oral histories are recorded and added. 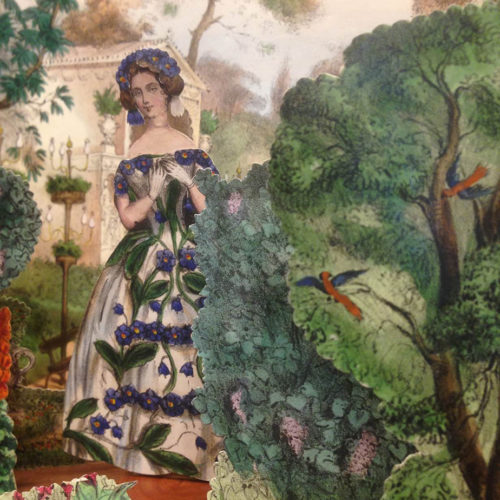 We have a growing collection of games and pre-cinematic toys that serve to illuminate 19th and early 20th century material culture, such as Les Fleurs Animées (The Animated Flowers). This circa 1850 French paper doll game was inspired by the popularity of J.J. Grandville's caricature book of the same name in which the personalities of society women are associated with flowers. The hand-colored game includes its original box, twelve costumes, and moveable scenery. 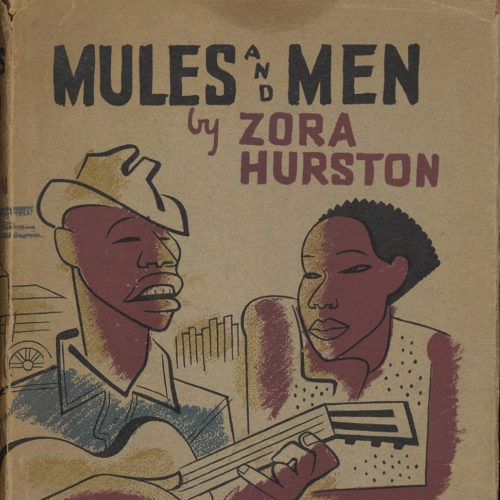 American literature is richly represented. Holdings include first, limited, illustrated and special editions of works by major literary figures from the colonial era through the present; correspondence, notebooks and manuscripts of Baltimore and Hopkins-affiliated authors, editors, publishers and critics; works by women, African-American, ethnic, “minor” and “popular” authors; anthologies, textbooks and works of criticism; juvenile literature; broadsides, periodicals and other forms of ephemera. 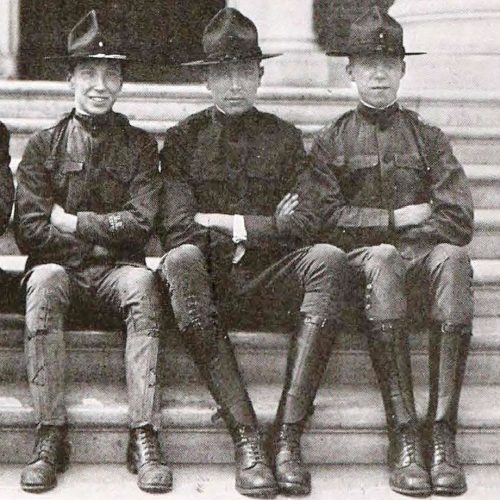 Hopkins and the Great War

An exhibition exploring the impact of World War I on the Johns Hopkins community, including members of the Homewood campus, the hospital and School of Medicine, and the School of Nursing. By looking at the lives of students, faculty, and patrons, we can understand the complex and far-reaching ways the Hopkins community both contributed to and was affected by this devastating global conflict. 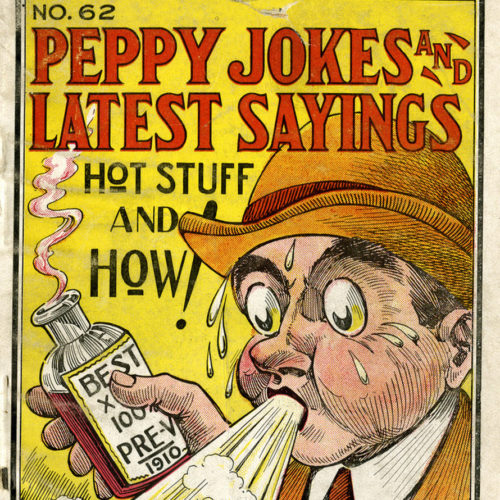 Baltimoreans Ike and Moses Ottenheimer entered the book trade in 1890, and made a lasting contribution to the study of American humor through their joke books. Featuring colorful covers and priced to sell, their pocket-sized tomes became a hit nationwide. Today, these books are representative of Baltimore's history as a book production center and are rich resources that reveal how humor is used to address social change, from the invention of the automobile to the rise of the flapper. 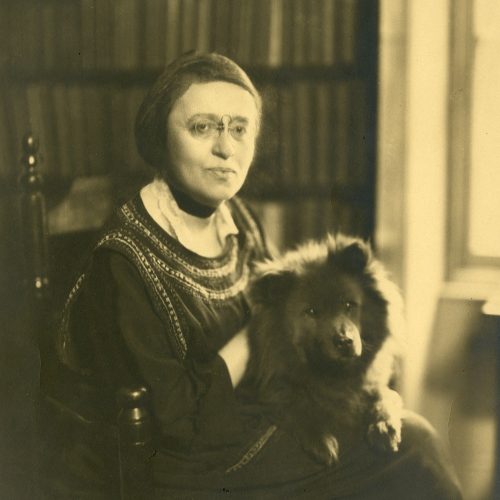 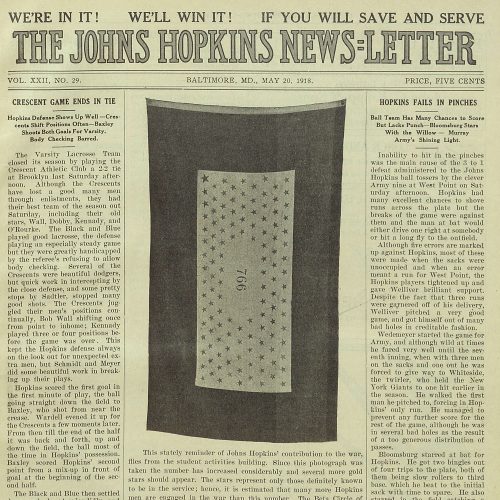 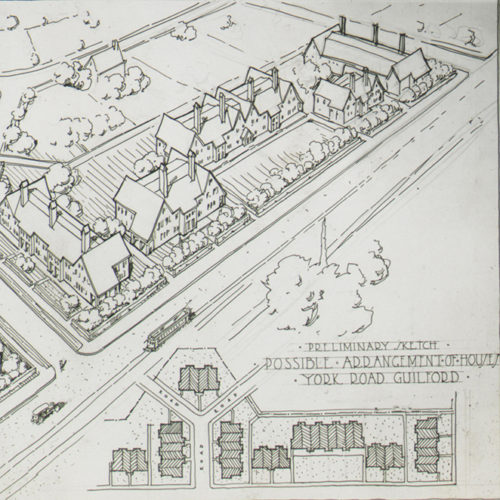 The Roland Park Company records document the corporate history of the Roland Park company, which developed the neighborhoods just north of Homewood campus, in the process inventing the modern garden suburb as we know it. 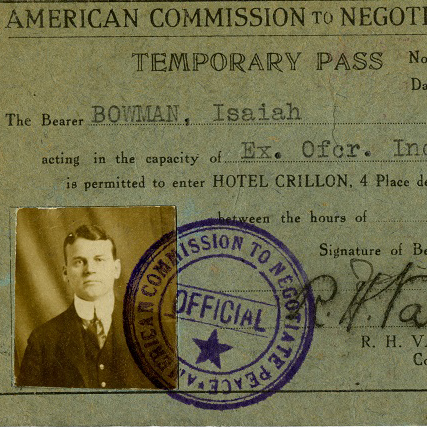 An influential and controversial figure in our university's history, Isaiah Bowman was Johns Hopkins University's President from 1935 to 1948. 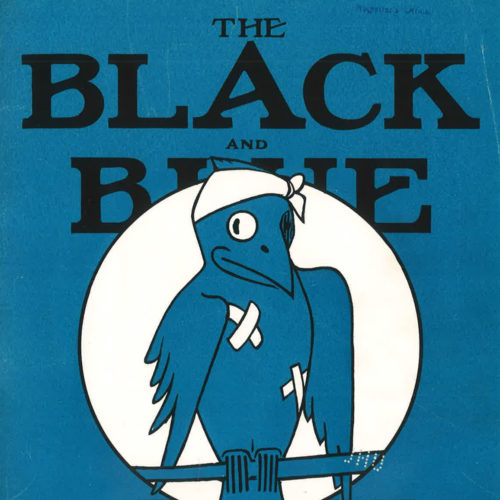 The Black and Blue Jay

The Black and Blue Jay is a Johns Hopkins University student-run humor publication first published in the 1920s. 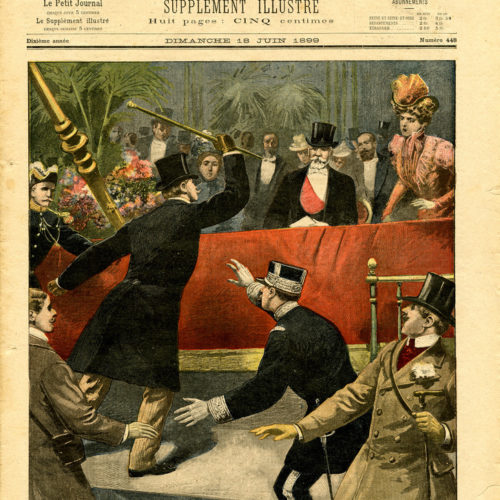 The Dreyfus Collection includes contemporary journals documenting the case. The majority of the examples are from Le Petit Journal, a daily Paris newspaper/magazine founded by Moïse Polydore Millaud, and published from 1863 to 1944. The weekly illustrated supplement of Le Petit Journal depicts events related to the Dreyfus Affair during the period 1897 to 1899. 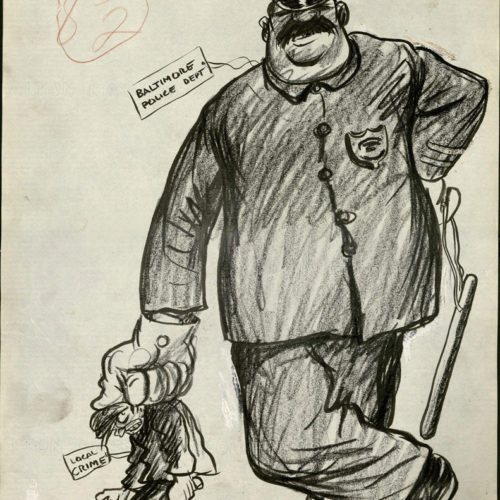 Since the proliferation of Benjamin Franklin’s infamous “Join or Die” drawing in the 1750s, the political cartoon has enjoyed a significant presence in American history and politics. Iconic historical events, figures, and debates have been chronicled through the lens of various cartoonists’ work, serving as a form of documentation, commentary, and in some cases, protest.