Skip to content
Home > Giving to the Libraries > Champ and Debbie Sheridan: Benefactors of the Sheridan Libraries

Champ and Debbie Sheridan: Benefactors of the Sheridan Libraries

Giving to the Libraries

“We were all the recipients of someone else’s kindness, love, and generosity. In a sense, a trustee is not only preserving Johns Hopkins but enlarging upon it and passing it on to future generations”
Champ Sheridan

R. Champlin “Champ” Sheridan (1930 – 2013) was a 1952 graduate of the School of Arts & Sciences, a trustee emeritus, and a generous benefactor to Johns Hopkins University and to the libraries that today bear his name. Sheridan, a Baltimore-born printer and son of a printer, supported the university’s libraries in part because of what he called “sort of a natural affinity” for books and periodicals. 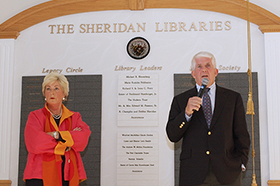 Along with his wife Debbie, Sheridan transformed the libraries at Johns Hopkins University through multiple gifts. In 1998, the university honored the Sheridans by collectively rechristening as the Sheridan Libraries the Eisenhower Library, the Albert D. Hutzler Reading Room, the John Work Garrett Library at Evergreen Museum & Library, and the George Peabody Library. The Brody Learning Commons, completed in 2012, has since been added to the Sheridan Libraries family.

For the unveiling of their portrait in the Eisenhower Library, the Sheridans and their beloved dog, Kermit, hosted a barbecue on the Beach for students.

Sheridan, whose summer job after his freshman year at Johns Hopkins was hauling books for the library—”very physical labor”— said that a library “influences so much else at the university.”

“It is,” he said in a 1994 interview, “the cornerstone, the foundation of the university—the university as a forum for exchanging ideas and developing knowledge, not as a building or edifice. [Debbie and I] felt we could have a more long-lasting and broader reach by focusing on the library….”

Learn more about Champ Sheridan’s life and legacy in this profile on the JHU HUB website.