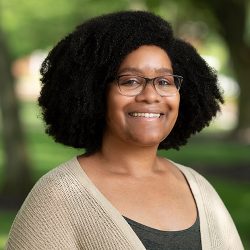 Transplant from Washington state by way of Illinois, Miriam Heard is the Resource Sharing Librarian Supervisor for the Milton S. Eisenhower Library. She holds a BFA in Illustration from the American Academy of Art, and an MLIS from the University of Washington. Her early library career includes time spent at the Illinois Institute of Technology Chicago-Kent College of Law, DePaul University, and Northwestern Pritzker School of Law as a library specialist in varying capacities. Her role as a librarian was actualized through her three and a half years at Lake Forest College before she joined Johns Hopkins in April of 2021. With two integrated library system migrations under her belt, she has also provided support to her previous teams with a variety of software and platform implementation projects.

Miriam’s role at Johns Hopkins taps into her previous library experience as an innovator and anchor for support to any and all who she collaborates with.

In Miriam’s spare time she enjoys mentoring future librarians from her alma mater, serving as a community member of Lake Forest College’s student-run radio station, and when her hands aren’t full of her two cats—she’s busy knitting.